Bird calls fulfill a wide range of communication functions between individuals and groups of the same species, or in interactions with other species. On this page Ozcranes looks at the types of crane calls and their functions, with an intriguing musical connection to violins rather than the obvious impression of ‘trumpeting’ or ‘bugling’ calls. By courtesy of recorders and others, we present a range of Brolga and Sarus Crane calls recorded in Australia that can be played from this page, as well as links to other sites with relevant audio or video examples. 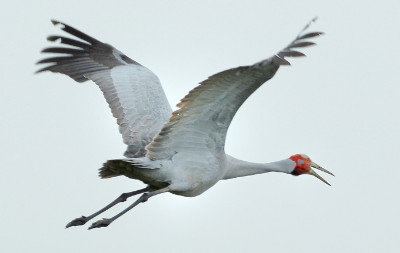 All crane calls are innate (‘hard-wired’, not learned from others or affected by environment). Some are soft, communicating information over short distances: these include contact, stress and food-begging calls of chicks, and purring sounds made by adults while feeding. In contrast the famous unison call or duet by a mated pair, can be heard 2-3 kilometres away [1], [2].

Types of crane calls, their volume and distance

Cranes enhance the volume of long-distance calls with a coiled trachea that resonates in the sternum. Coiled trachea and sternum of male Sarus Crane (from Edward Blyth (1881), The Natural History of the Cranes) 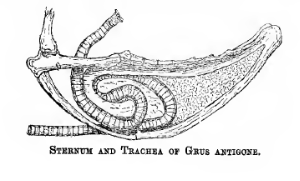 The loud calls are known as trumpeting, or bugling, in fact the International Crane Foundation has a regular magazine called ‘The Bugle’. But is this analogy accurate? Abbott Gaunt and team [3] examined call function in several species and found that loud calls are produced by a process similar to sound in a stringed instrument, not a wind instrument: violins, not bugles...

The tracheal coils that are embedded in the sternum serve a function analogous to the bridge of a stringed instrument, transmitting the vibrations of a tiny sound source to a large radiating surface, the sternum. The sternum then vibrates against the large internal air reservoir of the avian airsac system. As it has a complex shape, the sternum will have many resonances and will respond to many frequencies; as a solid oscillator, its resonances will not be greatly affected by low density gases. Hence, we suggest that cranes and other birds with enlarged windpipes are more properly analogized with a violin than a trombone.

Young cranes transition from juvenile to adult calls during their first year, with a distinct ‘voice break’ at around nine months, when they separate from their parents before the next breeding season [1], [4]. The unison call between mated pairs is similar in related species, for example the unison calls of Brolga, Sarus Crane, White-naped Crane and (more distantly) Sandhill Crane, are similar in structure [1]. 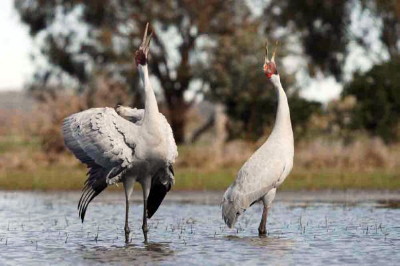 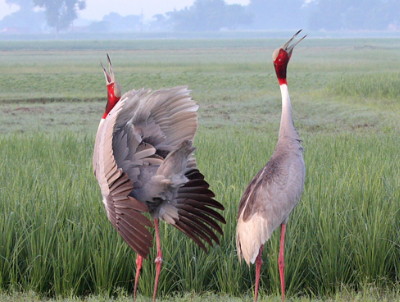 Change AT to @ and DOT to . in email addresses 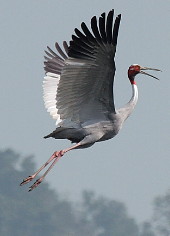 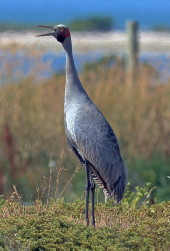 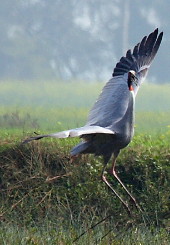 ↑ One of a Sarus pair in Nepal, calling while dancing (K.S. Gopi Sundar) 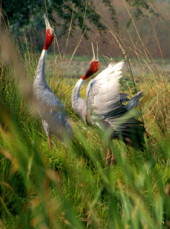 Images by Birds as Poetry are used under a Creative Commons Attribution-NonCommercial ShareAlike2.0 Generic Licence